Semiotics is the Science of Signs, Symbols, Meaning Communication, the science of secret Codes, the science that aims at uncoding reality.
Semiotics, also called Semiology, analyzes the functions of signs and symbols in human world and in any other system, and is the foundation of any modern communication science and Systems Science.
The roots of Semiotics can be traced back to Aristotle analysis of persuasive messages, to ancient Latin and Roman thinkers that tryied to decode how persuasive speech functioned and European philosophers from the medieval age onward.
Considered a part of philosophy, barely knowm even by academics, it has been neglected by modern psychology and management science, considered too exoteric, alchemic, and strange.
Its roots, based on a “search of meanings”, are disturbing for the narrow-minded short term-based companies cultures, and in modern eras dominated by hard data. In “fast and easy” mental diets, that search seemed too hard to be achieved.
But than, deep “crisis of meanings” arrived. The collapse of giant Multinational corporations like Enron, the “Too-big-to-fall” companies financial collapse of the Junk Bonds era, the “fall of the Giants” in the Internet Golden Age, Corporate Scandals like Volkswagen diesel engines crisis , huge catastrophes like Chernobil, Fukushima, Three Miles Island, just to mention a few.
In all of these Crises, the underlying root-cause problem was the Leaders’s lack of values, its behavioral consequences, the loss of meaning of what wise and good Leadership really is. A Value-Baesed Leadership, a Wisdom-Based Leadership mentality, was lost.
Well, when we look at any type of crisis, organizational crisis, personal crisis, and human factor crisis in a broad sense, meaning is not just something. It is everything.
Without a sense of meaning in what we do, we would not even wake up in the morning. Organizations that perceive no more meanings in what they do, dissolve quickly. Leaders whose words seem just empty talk, lose power quickly and get caught fast as bureaucrats or fake leaders rather than charismatic leaders.
From public speaking, to leadership behaviors, up to the ability to reveal codes and mysteries of mankind, semiotics is the basic discipline that can shade light where other cannot.
Its applications are so widespread that any field of human life is potentially explorable as a system of codes, signs and meanings, external behaviors and deeper intentions, external representations and inner values. And we can remember, just to mention some, that Semiotics is the science behind any type of Secret Code decoding. Therefore, it can be very useful to unlock some Secret Codes of Leadership.
This work aims on Semiotic for Leadership is the search of a new contribution to some of the yet unexplored areas of Leadership.
In a Semiotic view, it is important to identify which communication systems leaders employ to define their leadership, and therefore, a Semiotics of Leadership can really be seen as a science of the different Leadership Styles and different communication styles.
Every leader learned a different set of signs, to convey different sets of meanings and underlying values.
The Semiotic Exaleadership Models identifies the “6 Primordial Models” used by leaders to establish their status and communicate. We will get to them very soon.
As a preparation, think of symbols as “denotators” (signifiers) of some deeper and sometimes hidden meanings. Semiotics takes care of this special relationship between external symbols, signs or emblems, and deeper meanings, up to the level of what effect they can produce on people.
Can the use of a given word be persuasive? Or is it better to find another word. How will a given body language sign be interpreted by the audience? Can that uniform really convey respect? What do you have on your desk or at the walls of your house? Are you aware of the interpretation that people give to them?
Symbols can be representative of a whole world-view, such as the swastika used by the Nazis Party, or the hammer and sickle of the Communist Party. But also the body of a bodybuilder in a Gladiators movie, a symbol of power, strengths and courage. Even objects can be used to convey meanings. A luxury car or a fancy house can be used as a symbol of status, and this attempt can have the desired effects of depicting a positive image, or instead become a boomerang on relationships.
Even the red light that you see at the traffic light is a sign with much deeper meanings (stop, danger, blood).
A semiotic analysis of Leadership must therefore look at the associations between Leadership and its significant connections, such as power, status, leadership communications, understanding and misunderstandings, ability to convey powerful messages, human energies, and how they are brought out at their best, not only through words but with an entire set of tools.

The Greek Aristotle was the first real communication scientist, much earlier than the opening of any Department of Communication or Psychology. In his treaty on “Rhetoric” he taught us that a persuasive message must contain:

Modern research says he was right. We tend to judge a speech and the speaker against our own values, as Aristotle said, ethos is the effect of feeling in the message the presence of wisdom (phronesis), virtue (arete), and good will (eunoia);

There is now high consensus in the scientific community on the Power of Communication derived by emotions, with many of empirical findings:

What does this all mean? It means that we have to learn the Power of Communication, the ability to motivate, to inspire, to share deep meanings, instead of swimming in a pool of banality and empty gossip.

Many phrases from the ancient world shade light, and we have to look for them where the Greco-Latin Culture left its seeds. But also in several modern thoughts found in the Anglo culture, at least on its best humanistic side, and for sure not in its materialistic side.

The power of some words and mottos is so great that they are still used today after 2000 and more years.

A healthy mind in a healthy body[2]

But there is more. Human Potential expression requires not only a good and healthy communication environment (ecology of communication), but a healthy mindset that keeps a positive psychology inside our soul, and a strong attention to our bodily machine, its nurture, its well-being, obtained via physical exercise, good nutrition, and a clear mind.
All the three aspects are intrinsically correlated.
In this Holistic view, wellness and performance depend on the degree to which we are able to set these conditions, despite what the environment presents us as “given state”.
To go beyond the “given state” and look for our Full Potential enables the expression of incredible performances and contributions to mankind, and this is our sacred mission. 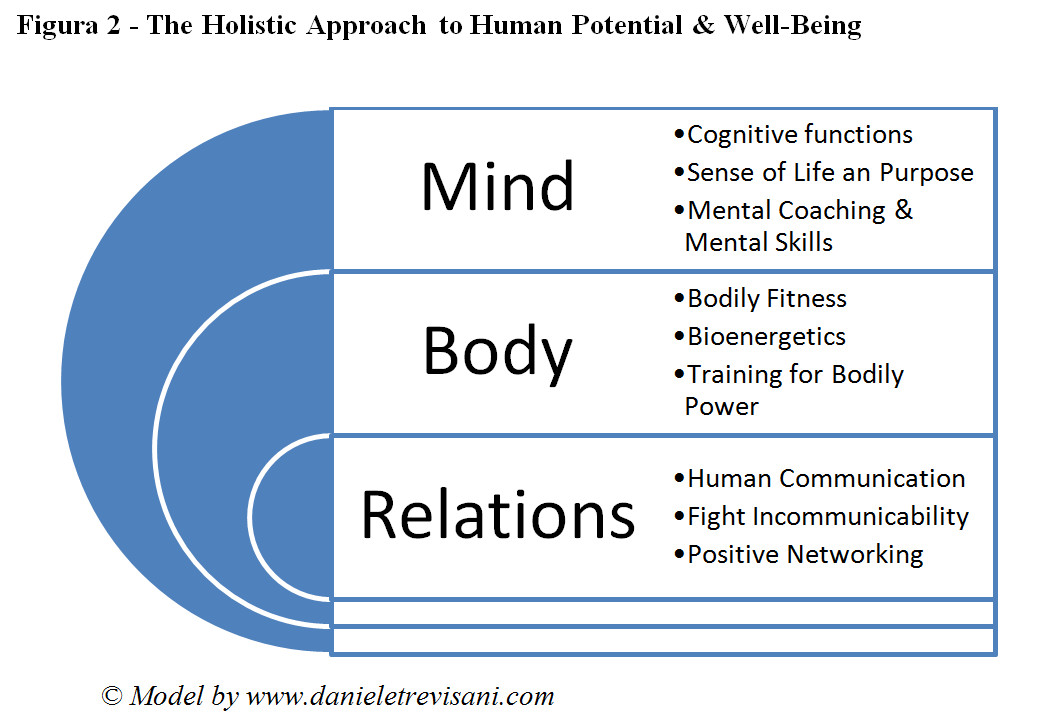 A healthy mind in a healthy body is not only an ancient motto.

It is a way of life that is ordinarily unpracticed from ordinary people, and managers in the companies, where the number of hours spent in the office becomes the benchmark, rather than the real intellectual contribution, the quality of your ideas and energies you generate in your working environment. Your real energetic contribution to your company is completely lost, confused with “hours spent inside”.

You even lose the ability to distinguish the people that are around you (coworkers, consultants, trainers, friends) in terms of the real energies the can provide and bring and you start measuring sick parameters, things as age or career level or the car they have or where they live. Well, let me tell, you, Albert Einstein – in this evaluation system – would have never come out of his desk as clerk, since he was not in the academia and was not a well-paid, well dressed manager with a fancy car. But his ideas changed the world.

Are you able to spot people with great ideas? How do you measure them?

Latins believed that since we are born we are fully involved in a journey. We run, whether we like it or not. We stop, whether we like or not the stopping areas and landscapes we encounter. And in this world we need to feed our soul and our body with positive energies.

Spa as modern structures where originated by the Romans and made free for all the “citizens” in Rome. A Spa is a location where mineral-rich spring water is used to give medicinal baths. Spa towns or spa resorts (including hot springs resorts) typically offer various health treatments. The belief in the curative powers of mineral waters goes back to prehistoric times. Such practices have been popular worldwide, but our culture is so spiritually poor that – despite the Roman habit of having them free and used for meeting, socialization and conversation places – now it has become an elite costly service and not a public service. This is just one of the thousands of “ways of living” that we can and must recuperate.

[1] Pilar Ferré, David Ventura, Montserrat Comesañ, and Isabel Fraga (2015), The role of emotionality in the acquisition of new concrete and abstract words. Frontiers in Psychology, 2015 Jul 2;10(7).

[2] This Latin phrase – as many more that we will not examine – has been adopted widely, showing how deeply Latin Culture pervaded European and US culture. The following list shows some examples: